RSP and the Redetermination process 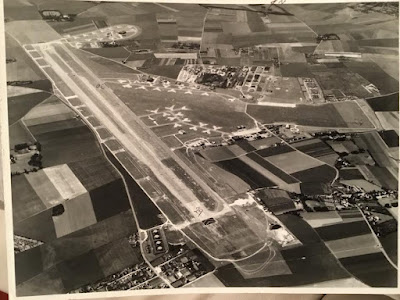 On the 9th December 2021 Riveroak Strategic Partners posted on their website an attack on, not just the Secretary of State (SoS) for Transport, but the entire redetermination process which I have set out here.

I have added various editors remarks in BOLD as this response seems somewhat biased which seems to be Freudmann's Rottweiler attack dog methods. I believe it is aimed at the supporters rather than any serious attempt to negotiate with the SoS

"In a covering letter to its response to the Arup Assessor’s report, as part of the redetermination process for the Manston Airport DCO, RiverOak Strategic Partners has set out concerns over not only the content of the Arup Report, but also the “untimetabled and protracted” process of redetermination that the Secretary of State for Transport has presided over – signalling that, had RSP known earlier how poorly the process would be run, it would not have consented to the Secretary of State’s decision to concede.   (Editor's comment, It is past time for RSP to pay up what the judge awarded)

In the letter, submitted on behalf of RSP by its lawyers BDB Pitmans, RSP also expresses its concern that, having withheld the basis on which Arup was commissioned, (Editor's comment, No one was told what the brief was so RSP wasn't disadvantaged however the letter set out the following which is as much as anyone had and to which RSP actually responded 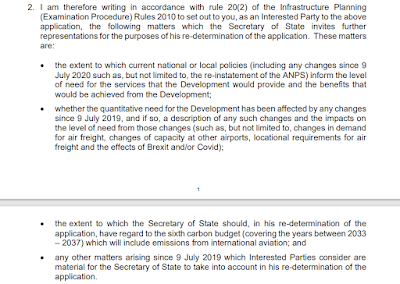 "the Government only revealed the terms of reference under which Arup worked when forced to do so – following a Member of Parliament making a Freedom of Information request. (Editor's note, which was never shared with anyone else)

In the main body of the response, RSP sets out its concerns that, instead of addressing the issue of ‘need,’ Arup produced a narrowly focused demand study, which only considers changes to demand in relation to Covid-19, Brexit and other factors. The unknown authors of the report have focused on issues entirely unconnected to the Judicial Review and redetermination – such as e-commerce, changes to aircraft design, impacts on GDP and national resilience – and have also attempted to consider the issue of ‘viability’ which, in addition to not being an appropriate consideration in this redetermination would have required interrogating RSP’s  business model (editors note, which would have been difficult as RSP have never published it) to do so effectively, which was not done.

The RSP submission argues – and provides evidence to substantiate these arguments – that the Arup report should be given little weight due to a number of other concerning factors too, including:

"Tony Freudmann, Director of RSP, said: “Something about this report and this redetermination process simply isn’t right. Our growing concern is that someone, somewhere is throwing up delays and obstacles while they scratch around for evidence as to why this fully-funded (Editors note, Never have RSP stated who is providing their funds) evidence-based economic regeneration project should not proceed.

“Despite all of this, we are still here and we remain confident that the reopening of Manston will succeed and will be of measurable benefit to the nation – and, importantly, to the deprived East Kent region.” (Editors note, the issue is one of NEED)

In the letter, BDB Pitmans also points out the real world implications of the Government’s protracted handling of the process, stating:

“This delay is not taking place in a vacuum, it has real world effects and is prejudicial to the Applicant and the UK economy. It is deterring and confusing investors, particularly from overseas, who had embarked upon their proposal to invest in the UK because of the certainty of timings of the DCO regime but can no longer rely upon it. In general, further, delays mean that responses have to be updated to take into account changes in policy in this field. With every passing day evidence and commentary are published, especially within the trade press for the aviation industry, which further strengthens the Applicant’s position. In addition, even the Department for Transport can be seen to be promoting the UK aviation industry in the trade press.

“Given the current economic uncertainty, the government is surely keener than ever for inward investment into the UK, but through its own actions is making this less likely to happen. The delay also causes an unnecessary harmful local impact (Editors note, Forgetting the decision has to be decided on a Nationally Significant Infrastructure Project basis not just an East Kent basis which would likely damage the East Kent tourist industry, a point conceded by RSP in their original submission. There is no point in robbing Peter to pay Paul) . Employment is more precarious than ever, and has been exacerbated by the end of the furlough scheme, and yet there is undue delay to this development which would bring thousands of high quality construction jobs and more permanent jobs.

“Through no fault of the Applicant, almost two years have passed since the decision was initially due to be taken on 9 January 2020 (Editors note, I would also remind RSP that the DfT paid them £8.5m as compensation for "delaying" their plans) . The application is now in an indefinite decision stage with the prospect of many months more before the decision is retaken. The above points should be given serious consideration and responded to accordingly so as to maintain confidence in this regime, particularly among private inward investors into the UK such as RSP. The supposed certainty of timing of the Planning Act 2008 regime is one of its main strengths for investors and this should not be undermined.”

RSP is now calling on the Secretary of State for Transport to publish a timetable for the redetermination process, as this will at least provide some certainty that a decision will be made shortly. It is assumed that this will be welcomed by both supporters and opponents of the proposals as it will provide much needed certainty for a deprived part of England in desperate need of economic and employment opportunity one way or another.

(Editors note, I would also remind RSP that the DfT paid them £8.5m as compensation for "delaying" their plans)

Further the following notes have been emailed to me